Many people will have heard the comment attributed to Albert Einstein and often called the definition of insanity. 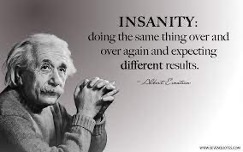 Whether he said it or not, the premise remains that doing the same thing repetitively may not be good.

OK, if you need to maintain some degree of quality assurance perhaps doing the same thing, if all other factors within a process remain the same, could be a good thing; but what about when this statement is applied to the approach of a leader?

People in leadership positions are often extremely busy people and therefore inclined not to stop too often to think about their own performance. Why would they? It often gets in the way of getting ‘stuff’ done!

Would it not make some sense that each time something has been achieved, or not, that a high performing leader sits back and reviews whether they could have done anything to improve? Or if we use Albert’s (attributed) thinking, to do the same thing that elicited a good response that last time?

Often leaders are encouraged to continuously improve something, to achieve better results, or to develop something. This can often lead to a ‘change mindset’, which, whilst a distinct benefit, could also mean that they overlook things that are already working well for them.

The art of good leadership is often about the balance between striving for new achievement and recognising where strength lies. However, few leaders spend enough time to reflect on both equally; often leading to their teams complaining that there is a constant feeling of change.

Of course, modern leaders experience constant pressure, which can lead to a forward facing, blinkered approach. So how can they find time to stop and think?

Listening is often a good start.

Let’s start with themselves…

After a particularly good day, or piece of work has been completed, it may be an opportune time to reflect on what exactly went well, and would that be a repeated pattern which can help future pieces of work? Being ‘present’ at the end of a piece of work, business meeting or conversation is just one of the ways in which leaders can decide what they need to do more of, or replicate, next time. Unfortunately, the inclination is often to get onto the next one!

Then there are the people that can help them …

Their teams may instinctively be able to tell them when they’ve done a great job, or even simply noticing the positive effect on the people they’ve just ended a meeting with is a good indicator. Being present again will help establish what exactly they may have said, or done, which enabled such a good outcome.

Or get some help …

Then, there’s external help in the form of personal coaches or consultants.

Perhaps it may be time to recognise that some support to see the ‘wood for the trees’ might be needed. This also means stopping to assess what may need to happen but is often harder to spot for themselves. Everyone has their own blind spots so getting an external view is often a way of identifying areas which may not naturally occur to them.

The first step to take is recognising that this is important and then finding someone to talk to.

Nobody, ever said that leadership was easy, however let’s not make it harder by missing the good stuff that what we’re already doing whilst striving for constant improvement!